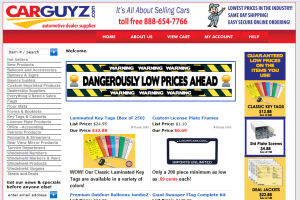 Google made more than $25B in 2008. Why is this important? It shows how many people use GoogleAds to find what they are looking for.

I became a believer when I was asked to start up GoogleAds for the software company in my previous job. Our average sale was $250,000.
I told my colleagues "there is no way people are looking for our software using GoogleAds." Boy, was I wrong!

After 5 years our numbers showed that we paid less for GoogleAd leads than for any other advertising venue. We also tracked cost per signed deals - GoogleAds led the way in that metric as well!

I manage and give help to several companies running GoogleAds. CarGuyz.com uses PPC and his numbers prove each month that he makes a good margin over what he spends.

It's in the Numbers
Several companies use my coaching services with GoogleAds - they run their own campaigns, but hire me to spend a few hours each month on conference calls and looking over the metrics. The most critical aspect of a having a solid GoogleAd campaign is paying close attention to the metrics. BUT you have to know which numbers are important.